The Hidden Danger of Calories in Drinks

We all know we should watch our calories, but the calories in drinks often hide under our radar. 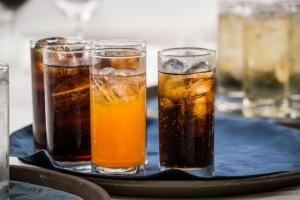 “What would you like to drink with that?” asks the waitress. Think twice before you answer. Your body may not register the calories in drinks as well as it does the calories in food. So when you down a soda or other liquid calories before or with a meal, you may not eat less food later in the day to compensate. Making matters worse: serving sizes for beverages are ballooning…as are Americans.

Beverages are a huge contributor to obesity. They’re major players that often get overlooked.

The stealthy calories in drinks

On days they ate the jelly beans, the participants compensated by eating roughly 450 fewer calories of other foods. So they ingested no more calories than usual.

But on days they drank the soda, the participants didn’t compensate. They ended up eating roughly 450 more calories than usual.

The calories in drinks don’t trip our satiety mechanisms. They just don’t register.

But what about the long term? Researchers at the Monell Chemical Senses Center in Philadelphia gave 20 men and women about 40 ounces a day of either regular or diet cola (made with the artificial sweetener aspartame). After three weeks, the women who drank the regular cola gained an average of two pounds; the men’s weight didn’t change. On the diet soda, the men lost one pound and the women’s weight didn’t change.

It doesn’t matter if you drink them with a meal or before a meal, the calories in drinks add on to—rather than displace—food calories.

And that has contributed to the nation’s obesity epidemic. We’ve gotten fatter, but what’s really changed is that we’re drinking a lot more calories than we ever did before.

In the 1950s, a “family size” bottle of Coke was 26 ounces. But those days are long gone. Soft drink sizes at McDonald’s for one person now range from 12 ounces (for children) to 30 ounces. A “Double Gulp” at 7- Eleven convenience stores holds 64 ounces. That’s eight cups—a huge serving even if you get it with ice. And the soft drinks you get at movie theaters like Loews and some AMCs (which can hit 44 ounces) often come with free refills.

Sweetened soft drinks add more calories to our diet than any other beverage.

And although America’s appetite for soft drinks is finally starting to slow down, we still drink more of it than any other beverage.

But it’s not just soft drinks. A “venti” Caffè Latte at Starbucks is 20 ounces. A large shake at McDonald’s or a Dunkin’ Donuts Coolata is 32 ounces. And a single-serve bottle of just about any beverage—Arizona Iced Tea, Gatorade, Fruitopia, you name it—can run as high as 20 ounces.

Look at the “Nutrition Facts” labels on those bottles and you’ll see calories in drinks like these listed for an eight-ounce (one-cup) serving (as if people split the bottle into 21/2 servings).

But other than children who get an eight-ounce carton of milk with their school lunch, it’s hard to know who stops at one cup any more. You can’t even buy an eight-ounce drink at many restaurants. A“small” drink at McDonald’s is 16 ounces. And large sit-down restaurant chains like Applebee’s, Chili’s, Denny’s, Olive Garden, Outback Steakhouse, and T.G.I. Friday’s start you off with 14 to 22 ounces of soda…and offer free refills.

But at least some people think twice before gulping down 1,000 calories of food. They may not question the “hidden” calories in drinks.

Yet they’re so easy to avoid. Dieters may have trouble eating less food over the long term. But surely they could get used to drinking non-caloric beverages with and between meals.

People who want to keep their weight under control have two options: Either start consuming more non-caloric beverages like water, tea, coffee, or diet soda. Or drink whatever they want, but try to compensate by eating less food.