Still, there are other reasons why grass-fed may be better. 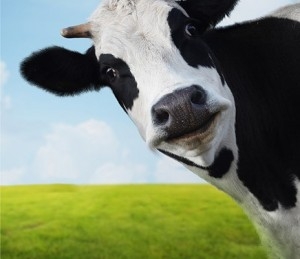 “Grass-fed cattle are equally bad as grain-fed cattle for producing the potent greenhouse gas methane,” says Walter Willett, chair of  the Department of Nutrition at the Harvard T.H. Chan School of Public Health in Boston. “Per cow, they produce the same amounts.”

How can that be?

True, the grass-fed cattle save the greenhouse gases caused by growing the enormous amounts of grain needed for the feedlots, he explains, but those savings are lost because grass-fed cattle live a lot longer.

The time to market is about a year and a half for grain-fed cattle and up to four years for grass-fed beef. So the grass-fed are expelling methane gas into the atmosphere for more than two years longer than the feedlot cattle.

In contrast, chicken comes to market in six weeks. “So chickens are alive for much less time, and they don’t produce as much methane as cattle do,” Willett points out.

However, there are other reasons why, if we stopped feeding grain to cattle and switched to grass-fed, this would have substantial benefits for our health and the environment.

“We would save the huge amounts of water needed to grow grain, we’d use less antibiotics, and we’d reduce pollution,” Willett says.

How does grain-fed beef cause more pollution than grass-fed cattle?

Mostly from manure runoff, notes Willett. “With grass-fed cattle, manure is dispersed across the fields, and it gets into a regenerative cycle, while with grain-fed cattle, feedlot operations produce very concentrated quantities of manure that must be disposed of.”

The current cost of beef in grocery stores and restaurants doesn’t take into account the real costs of producing beef, he says. “Those costs include the huge environmental impacts of greenhouse gas production, pollution, and the healthcare costs of cardiovascular and other diseases that eating a lot of red meat causes.”

If we had only grass-fed beef available, there would be much less of it, so it would cost far more.

“We would treat it like lobster. If you really loved it, you’d eat it a few times a year,” he predicts.

Harvard is working on encouraging restaurants to shift more toward plant proteins. The University is collaborating with the Culinary Institute of America on a program called the “Protein Flip” that networks with restaurant operators and people who plan menus.

The idea is that instead of feeding plants and grains to animals, we flip that and feed those foods directly to diners along with much smaller amounts of animal protein.  “Although this momentum toward plant proteins is motivated by concerns about health and the environment, menus with less red meat can also be less expensive,” Willett points out.

Until recently, plant proteins haven’t been given the culinary attention that they deserve.

“In America, we often open a can of beans and dump them on the plate, while other cultures have learned thousands of ways to prepare beans that are interesting, flavorful, and enjoyable,” says Willett.

Examples are Middle Eastern hummus made of garbanzo beans, Indian dal made of lentils, and Japanese dishes with edamame or tofu. “At Harvard, our burgers now are almost all non-red-meat burgers,” Willett notes.   “You can choose from a couple of different veggie burgers, a fish burger, a poultry burger. We go for many days without beef burgers. It takes creativity, testing, and trial and error to find burgers that people like.”

“Restaurants say that people complain if a fish entrée is less than 8 ounces,” says Willett.  And the steaks they serve are even larger.

The idea is to downsize to, say, a plate with a salad and three slices of red meat. “Restaurants have found that people are happy with three to four ounces of fish rather than eight ounces if it’s part of an entrée salad,” according to Willett.

“Maybe a few times a year. I don’t enjoy red meat that much anymore, but sometimes I’ll have it at a social occasion if that’s what’s being served. It’s not like a religious abstention,” he says.

“But I definitely eat more plant foods than I did years ago. For breakfast, I almost always have nuts along with fruits and whole grains. For lunch, it’s usually tofu or beans or a peanut butter sandwich. And for dinner, it’s often poultry or fish.”

Find this article about animal protein interesting and useful? Nutrition Action Healthletter subscribers regularly get sound, timely information about staying healthy with diet and exercise, delicious recipes, and detailed analyses of the healthy and unhealthy foods in supermarkets and restaurants. If you’re not already subscribing to the world’s most popular nutrition newsletter,click here to join hundreds of thousands of fellow health-minded consumers.