Exercise and Beyond for Blood Pressure 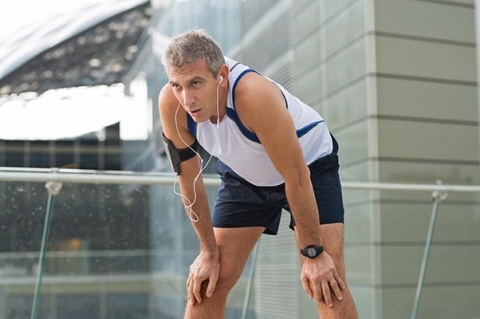 “Patients often say, ‘I don’t like to take medications. What can I do to lower my blood pressure?’” says Robert Brook, an associate professor of medicine at the University of Michigan.

“There’s been an increasing interest in yoga, acupuncture, and other alternative ways to lower blood pressure, but no one had sifted through the data.”

So that’s what an expert panel of the American Heart Association did in a report it released in April 2013.1 To the panel, which Brook chaired, “alternative” meant measures beyond losing weight, cutting sodium, or taking prescription drugs.

Of all the alternatives, aerobic exercise was in a class of its own. In most of the studies that the panel reviewed, people did moderate-to-vigorous aerobic exercise for 40 minutes three to four times a week.

Also beneficial: device-guided slow breathing, which uses a machine to train people to slow down and deepen their breathing. RESPeRATE, a machine approved by the Food and Drug Administration, retails for $300 online. Slow breathing could shave 3 to 4 points off systolic blood pressure, said the heart association panel.

The evidence for other “alternative” techniques wasn’t as solid.

However, “far fewer studies have looked at isometric exercise, and the studies were quite small,” Brook cautions, so the results are iffy.

In a recent meta-analysis, blood pressure dropped by 5 points in people doing isometrics.2

The panel gave a tentative thumbs up to Transcendental Meditation. “Studies consistently show a benefit for blood pressure lowering,” says Brook. The panel concluded that doctors “may” consider TM as a treatment for high blood pressure.

In contrast, “other meditation techniques, like Zen or mindfulness-based stress-reduction meditations, were more hit-or-miss,” says Brook.

Nor did the panel find good evidence for yoga or acupuncture, both of which it advised doctors not to consider.

“I’m not here to say that they don’t work,” says Brook. “But there are fewer published studies.”

And that’s not just for people who have been diagnosed with high blood pressure (who may also need drugs to lower their pressure).“Anyone with blood pressure over normal would likely benefit from these alternative therapies,” says Brook. (Normal is less than  120 over less than 80.)

Find this article about high blood pressure interesting and useful? Order a copy of Safe & Easy Steps to Lower Your Blood Pressure. Nine out of 10 Americans will eventually have high blood pressure and, with it, an increased risk of stroke, heart attack, diabetes, dementia, and more. But hypertension isn’t inevitable. Eating the right diet, losing weight, and exercising can keep your blood pressure under control. And if you do have prehypertension or hypertension, they can lower your pressure as much as—or more than—prescription drugs. This booklet, from the editors of Nutrition Action Healthletter, shows you how.