How the United States compares with other countries. 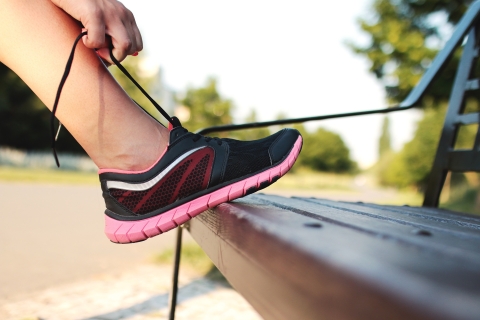 Heard that you should aim for 10,000 steps a day? “That was a business slogan that started in the 1960s when a Japanese company introduced a pedometer named ‘10,000 steps meter’ in Japanese,” says researcher Catrine Tudor-Locke.

So how many steps should we take each day?

“If you walk at least 7,500 steps a day, you’re in the money because you’re likely to be meeting  the national guidelines for physical activity,” she says. Those guidelines recommend 150 minutes a week of moderate exercise or 75 minutes a week of vigorous exercise.  “Walking includes stepping, running, hopping, dancing, anything that’s moving with one step following the other,” she explains.

Tudor-Locke studies how the physical activity recommendations translate into daily steps at the Walking Behavior Laboratory at the Pennington Biomedical Research Center in Baton Rouge, Louisiana.

Walking more than 7,500 steps a day is fantastic, but not necessary, Catrine-Tudor notes. “It’s not like there’s a single value where the heavens open up and the angels sing or anything like that, it’s a continuum.”

However, more is better. “We know that the health benefits from walking are greater as you increase the number of steps,” she says. “But the nice thing about walking is that you get a big return for even a small investment if you’re starting out with a smaller number of steps and you increase that even modestly.”

How are we doing?

Adults in the United States average only 5,000 to 6,000 steps per day, the lowest level of any industrialized country that has collected data. “Falling below 5,000 steps is definitely a red flag and less than 2,500 steps a day is a very big concern,” she cautions. It puts you at greater risk for chronic diseases like diabetes and for premature death.

The real power walkers appear to be the Amish. “They don’t use motorized equipment, they don’t use electricity, so they follow a lifestyle that we may have lived in the past,” says Tudor-Locke. The Amish in southern Ontario, Canada, average about 18,000 steps per day for the men and about 14,000 steps for the women.

Pace is important, too.

“Make sure that you walk at least 3,000 of your daily steps at a pace of more than 100 steps per minute,” Tudor-Locke advises. “People who walk at that pace in our studies are walking purposely and going someplace and this equates to moderate intensity. So 3,000 of these steps is basically the same as half an hour a day of moderate intensity exercise.”

What’s the best way to count your steps? There are many fancy devices available now, says Tudor-Locke, but you don’t need more than a simple workhorse pedometer. “It can have a single button, it should have a battery that lasts at least three years, and when you put it on and take 20 steps it says you took 19, 20, or 21, which is reasonably close, she advises. “That’s the one you want and expect to pay $20 or $25 max for it.”

Wrist-worn devices are popular now, but these give you a much higher number of steps per day than one that’s worn at the waist. “Just know that it will consistently record a high count,” she adds.

Harder to fool oneself

New York Times columnist and Nobel laureate Paul Krugman uses a device to record his steps. “What fitness devices do, at least for me, is make it harder to lie to myself,” he wrote on his blog.

“It’s all too easy to convince yourself that you’ve done enough walking, that shuffling around filing books is a pretty good workout.” But there’s our fitness device telling you that you walked only 6,000 steps that day. “For me, at least, the technology helps a lot, not because of the information, exactly, but because it makes self-deception harder.”

Find this article about walking for exercise interesting and useful? Nutrition Action Healthletter subscribers regularly get sound, timely information about staying healthy with diet and exercise, delicious recipes, and detailed analyses of the healthy and unhealthy foods in supermarkets and restaurants. If you’re not already subscribing to the world’s most popular nutrition newsletter, click here to join hundreds of thousands of fellow health-minded consumers.