Covering the Spreads: Sorting Through The Claims

Covering the Spreads: Sorting Through The Claims

Talk about confusing. These days, butters, margarines, and other spreads all sound good for you.

Most have "0 grams trans," according to the labels, though they still deliver some heart-damaging trans fat. Many crow about their healthy olive, canola, or flaxseed oil, though they may contain too little to matter. And some boast about their "buttery taste," though almost all margarines and other spreads try to mimic butter.

Five minutes in the spreads aisle could make your head feel like whipped butter. Luckily, buying a decent spread is pretty simple. Look for one that doesn't contain partially hydrogenated oil and that has as little saturated fat as possible. (Our Best Bites have no more than 1.5 grams of sat fat per one-tablespoon serving.)

Here are some examples to help you decode the confusing claims that crowd spread labels.

"0 grams trans per serving," mean they're totally free of trans fat. According to the Food and Drug Administration, if a food has less than 0.5 grams of trans in a serving, the label can say "0 grams."

So "0 grams trans" really means 0.3 grams of trans fat in a tablespoon of Benecol Light or I Can't Believe It's Not Butter! Original, 0.4 grams in Blue Bonnet or regular Country Crock, and 0.5 grams (0.47 grams, actually) in Land O'Lakes Fresh Buttery Taste spread. (Most of those numbers come from the Web site of competing spread Smart Balance, not from the companies, which are mum on trans levels below 0.5 grams.)

Is 0.3 or 0.4 grams of trans fat too little to worry about? It may matter more than you think. In 2004, a panel of scientists advising the FDA considered a limit of 2 grams of trans per day. So a spread that's labeled "0 grams trans" could supply nearly a quarter of a day's limit in every tablespoon. That's not trivial.

On the other hand, a tablespoon is roughly equal to three pats (or three teaspoons) of butter, and many people use less than that on a slice or two of toast. 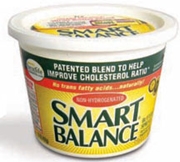 "Patented blend to help improve cholesterol ratio," says the big print on the front of Smart Balance's tubs. Few people read the small print on the back.

"The right blend of fats may improve the important cholesterol ratio when at least two-thirds of the fat intake in the diet comes from this product, or our Food Plan," it notes. That's what people ate in studies that tested Smart Balance's impact on cholesterol.

Regular (not Light) Smart Balance has more saturated fat (2.5 grams per tablespoon) than our Best Bites (1.5 grams or less). The extra sat fat might not be bad if at least two-thirds of your fat came from Smart Balance. But few people fall into this category.

Instead, most of us get plenty of saturated fat from foods like cheese, chicken, and even low-
fat milk, yogurt, and ice
cream. So you're better off with a spread with less sat fat (like our Best Bites) to balance" the sat fat in the rest of your diet.

A tablespoon of butter has 7.5 grams of grams of saturated fat—a third of a day's worth. It also has 0.4 of naturally occurring trans fat, which does as much harm as the artificial trans in partially hydrogenated oil. Yet some people insist on butter no matter what.

If that's you, check out Land O'Lakes delicious Light Butter with Canola Oil. Thanks to added oil and water, it has just 2 grams of sat fat per tablespoon and 50 calories (butter has 100).

Land O'Lakes Light Butter with Canola Oil isn't low enough in saturated fat for a Best Bite, but it's as close as butter gets.

When it comes to baking cookies or cakes, a regular (non-light) tub spread like Promise Buttery is fine. (In some recipes, you can even get away with oil.)But to get a flaky pie crust, you need a solid fat. What are your choices?

Forget butter (7.5 grams of saturated fat in every tablespoon) and stick margarines like Land O'Lakes (2 grams of sat fat plus 2.5 grams of trans fat).

In contrast, you get less sat fat in Promise sticks (2.5 grams per tablespoon), Crisco (3 grams), or I Can't Believe It's Not Butter! Cooking & Baking (3.5 grams). But they're made with partially hydrogenated oil, so odds are that the "0 grams trans fat" on the labels really means 0.4 grams of trans in every tablespoon. (That equals the naturally occurring trans fat in a tablespoon of butter.)

Your best bet? Promise sticks probably do the least damage. But no stick is harmless, so save that pie-baking for the holidays.

"Made with ingredients to help reduce cholesterol," says the Smart Balance HeartRight Light label. Well, yes and no. Here's the scoop on the three main claims on HeartRight's label:

Bottom line: HeartRight Light is a Best Bite, and its plant sterols make it even better. But it's not as good as its label implies.

"Masterfully blended oil for the demands of high heat cooking," crows the designer can of PAM Professional Cooking Spray. With 0 calories, 0 trans fat, and 0 saturated fat in each serving, what's not to like?

A "serving" of most cooking sprays is one-third of a second, according to the labels. What if you take longer to coat a pan? According to the company, a 1-second spray of PAM has 7 calories and less than 1 gram of fat. That's darn good.

Exception: PAM Professional. Unlike other sprays, it contains partially hydrogenated oil. We estimate that a 1-second spray has around 0.2 grams of trans fat. Hold down the nozzle for three seconds and you could be dispensing a third of your trans limit for the whole day.

With seven kinds of amateur PAM and at least a dozen other companies' sprays available, who needs a Professional?

Our advice: buy an oil spritzer from a store like Bed Bath & Beyond or Williams Sonoma and keep refilling it yourself.