Can You Lengthen Your Telomeres to Live Longer?

Why This Researcher Says the Fuss Over Telomeres "Makes Me Sad" 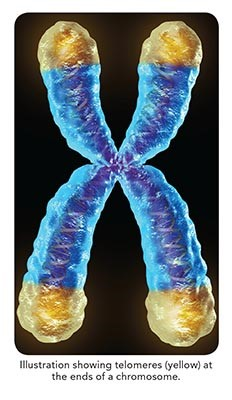 “If you want to live longer, take good care of your telomeres,” the Washington Post told readers earlier this year.

“The answer to long life may not be any magical ‘Fountain of Youth,’ but it may be hidden in your telomeres,” says swansonvitamins.com.

Telomeres are the caps that protect the ends of our 23 pairs of chromosomes—the twisted strands of DNA in the nucleus of each of our cells.

Every time a cell divides to reproduce, its telomeres get shorter. As Scientific American put it in 2009, “When they get short enough, our cells no longer divide and our body stops making those cells.” Over time, “this leads to aging and death,” the magazine noted.

“People with shorter telomeres have a higher risk of pulmonary fibrosis and aplastic anemia, and, if they’re smokers, they may be prone to emphysema,” says Mary Armanios, who treats patients with abnormally short telomeres at the Johns Hopkins Sidney Kimmel Comprehensive Cancer Center in Baltimore.

But having very long telomeres comes with its own problems. They’re linked to a greater risk of melanoma and lung cancer and some types of leukemia and brain tumors.

What’s a good length? “Most of us are in the middle range, which is the best place to be,” says Armanios.

Can you change your telomere length?

It’s good that most of us are in the middle “because no rigorous tests have ever shown that any drug, supplement, or lifestyle change can lengthen telomeres,” Armanios explains. In other words, there’s no good evidence for pills like Swanson Telomere Advantage Cellular Longevity Formula ($15.99 for a two-month supply). Or for a Mediterranean diet. Or for meditation or yoga.

The length of our telomeres is largely inherited from our parents, notes Armanios. And since few people have very long or very short telomeres, telomeres aren’t good at predicting how long most of us will live.

That may explain the results of a study that compared how well 20 risk factors could predict which of more than 4,500 middle-aged adults would die during the next five years. The risk factors included smoking, blood pressure, diabetes, body weight, and exercise habits.

Telomere length was one of the least useful predictors. In fact, it was little better than flipping a coin, the researchers noted.

“As a physician,” says Armanios, “it makes me sad that people worry about and spend money trying to lengthen their telomeres, when we know that a healthy lifestyle—including a healthy diet and exercise—has definitively been linked to slowing the effects of aging.”

Curious about how long your telomeres are?

Just mail a sample of your cells to California-based TeloYears (“Control how well you’re aging. And improve it!”). The company’s pin-prick blood test costs $89. Or send a cheek swab (and $150) to Tita­novo, a New York crowd-funded startup that will give you “a measure of cellular health and longevity.”

Earlier this year, one of us at the Center for Science in the Public Interest tried both.

About six weeks after we sent off his samples, the companies reported back. Both said that his telomeres were much longer than those of the average person of his age. According to Titanovo, his “telomere-based biological age” is 55. According to TeloYears, it’s 41. Since his chronological age is 69, that’s apparently good news for him, although Titanovo cautioned that his telomeres might be too long.

But it’s not clear that the tests produce accurate results. “The laboratory method that companies like these employ is the easiest to use, but the least reliable,” says telomere expert Mary Armanios.

The tests apparently do produce customers, though. Titanovo invited our colleague to buy more testing (and “DNA lifestyle coaching”). TeloYears encouraged him to exercise, eat a Mediterranean diet, and have the company—for a price—measure his telomeres periodically.

Find this article about telomeres interesting and useful? Nutrition Action Healthletter subscribers regularly get sound, timely information about how nutrients can affect their health. They also receive science-based advice about diet and diabetes, heart disease, cancer, osteoarthritis, and other chronic diseases; delicious recipes; and detailed analyses of the healthy and unhealthy foods in supermarkets and restaurants. If you’re not already subscribing to the world’s most popular nutrition newsletter, click here to join hundreds of thousands of fellow health-minded consumers.