Can multivitamins protect you from cancer?

What the best study so far shows. 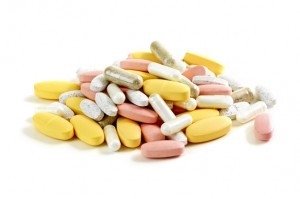 “For a lot of people, multivitamins add an extra layer of security to ensure they’re getting at least minimum levels of essential vitamins and minerals to avoid nutritional deficiency or insufficiency, ” says Howard Sesso, associate professor of epidemiology at the Harvard T.H. Chan School of Public Health in Boston.

But can a multi also prevent disease, like cancer or heart disease? That remains an open question.

In the Physicians’ Health Study II, Sesso and his colleagues randomly assigned more than 14,000 men aged 50 and older to take a daily Centrum Silver (one of the most popular basic multivitamin-and-minerals for seniors) or a placebo. After 11 years, the multi takers had an 8 percent lower risk of being diagnosed with cancer (and a 9 percent lower risk of cataracts) than the placebo takers. “And among men who had a history of cancer at the start of the trial, results suggested that the multivitamin was even stronger in preventing new cancers,” adds Sesso.

However, the multi takers were just as likely to have heart attacks or strokes, to suffer memory loss or other cognitive decline, or to die during the study. (Centrum had no role in conducting the study or interpreting the results.)

“We don’t know whether the lower cancer risk found in men extends to women, or whether taking a multivitamin has stronger benefits in those with a history of cancer,” says Sesso.

Until then, says Sesso, “we hope to fill in some of these research gaps with observational studies.”

Unlike a clinical trial, observational studies look at the risk of disease among people who do or don’t choose to take a multi on their own.

For example, the Nurses’ Health Study II has tracked more than 43,000 women since 1989. Those who took multivitamins were less likely to have precancerous colon polyps and less likely to be infertile because of ovulation problems.

Then there’s the question of what people take. “We don’t know if all multivitamin formulations have similar effects, or whether particular combinations of vitamins and minerals are better than others,” says Sesso.

Could multis be harmful?

A 2011 observational study of Iowa women rattled some people when it found that multi takers were slightly more likely to die than non-multi takers. But the result appears to be a fluke. Other observational studies and clinical trials don’t find a higher risk of dying among those taking a multi.

“There doesn’t appear to be any harm from taking ordinary big-brand multivitamins,” says Sesso. “But whether they can prevent disease remains a work in progress.”

Skip the specialized formulations that add herbs or other botanicals, says Sesso. “We don’t really know how these ingredients interact and what their long-term effects are.”

Find this article about multivitamins interesting and useful? Nutrition Action Healthletter subscribers regularly get sound, timely information about how nutrients can affect their health. They also receive science-based advice about diet and diabetes, heart disease, cancer, osteoarthritis, and other chronic diseases; delicious recipes; and detailed analyses of the healthy and unhealthy foods in supermarkets and restaurants. If you’re not already subscribing to the world’s most popular nutrition newsletter, click here to join hundreds of thousands of fellow health-minded consumers.