Another exotic fruit juice gets in trouble 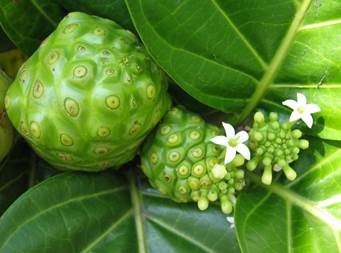 Eighteen years ago, a Utah bottler of a tropical fruit called noni paid $100,000 to settle a lawsuit filed by the states of California, Texas, New Jersey, and Arizona. The company agreed to stop making claims that noni could “prevent,” “treat,” or “cure” diabetes, depression, carpal tunnel syndrome, lupus, hemorrhoids, or other diseases.

Now a Hawaiian bottler of noni juice is in hot water over the same kinds of claims.

Noni (pronounced NO-knee) is a lime-green fruit the size of a small potato that grows in tropical Asia and on islands in the Pacific, including Hawaii. It was virtually unknown in the United States until 1996, when the Utah company now called Morinda (it’s the one that was sued) started selling it as a dietary supplement.

Not easy to swallow

Noni’s taste—and price—take some getting used to. People say it’s like consuming rotten cheese or old prune juice and that it smells like vomit or dirty feet. To make noni juice more palatable, manufacturers mix it with grape and blueberry juices. Morinda sells a one-liter bottle for $40 and claims it has sold billions of dollars’ worth of the juice.

A company in Hawaii called Healing Noni takes a different approach. It ferments the juice for four to five weeks and recommends that consumers mix it with other fruit juice to counteract the bitter taste. A one-quart bottle sells for $24 including shipping. On its website, Healing Noni claimed that the ingredients in its noni juice could prevent cancer, relieve pain, lower cholesterol levels, prevent blood clots, and kill bacteria and fungi.

None of these claims have been substantiated by good scientific studies. In fact, the National Institutes of Health says that “noni has not been well studied in people for any health condition.”

A few weeks ago, the Food and Drug Administration ordered Healing Noni to remove the bogus claims from its website. The company complied, but hasn’t informed visitors to the website about the retractions (or offered refunds as a result).

Years ago, University of Hawaii researcher Will McClatchey ran noni fruit through a series of preliminary laboratory tests similar to those that pharmaceutical companies use to see if potential drugs kill bacteria or interfere with the steps that lead to cancer.

“I haven’t found that the noni plant is any more filled with potent chemicals than lots of other plants,” he said. “If anything, it’s less active.”

Noni is not the only exotic fruit that’s over-hyped by companies. Pomegranate and mangosteen are two other examples.

In 2013, the Federal Trade Commission concluded that POM Wonderful’s advertisements for pomegranate juice suggesting that the juice could prevent cancer and heart disease were deceptive. In 2015, the Court of Appeals for the District of Columbia Circuit Court agreed, calling POM’s claims of health benefits “false and unsubstantiated.” In May 2016, the U.S. Supreme Court declined POM Wonderful’s appeal.

Find this article about deceptive claims for tropical fruit juice interesting and useful? Nutrition Action Healthletter subscribers regularly get sound, timely information about staying healthy with diet and exercise, delicious recipes, and detailed analyses of the healthy and unhealthy foods in supermarkets and restaurants. If you’re not already subscribing to the world’s most popular nutrition newsletter, click here to join hundreds of thousands of fellow health-minded consumers.