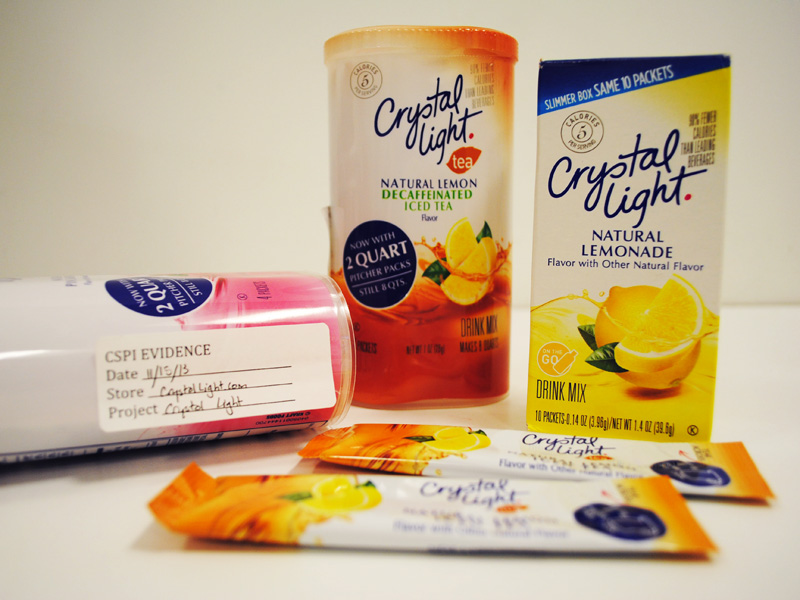 "Consumers are increasingly looking for 'natural' products because they expect them to be free of artificial sweeteners, dyes, preservatives, and other industrially created ingredients," said CSPI litigation director Stephen Gardner. "Crystal Light, which is almost all chemicals and almost no actual food, is the last product on Earth that should be masquerading as 'natural.'"

CSPI's notification to Kraft is one of three such demand letters the nonprofit nutrition and food-safety watchdog group sent to major food companies today. Other notifications, which are required by law in some states to be sent before suits may be filed, were sent to Smart Balance about unauthorized and illegal claims on its Smart Balance Blended Butter Sticks and Abbott Laboratories for deceptive and misleading practices with regard to its Ensure Nutrition Shakes.

The second of CSPI's pre-litigation notices was sent to Paramus, NJ-based Smart Balance, Inc., which markets, among other things, Smart Balance Blended Butter Sticks, whose labels claim in big print to "help block cholesterol." The smaller print indicates that the product's plant sterol esters help block cholesterol in the butter, but CSPI told the company that that statement is an illegal disease-prevention claim as well as an illegal health claim In fact, by marketing the sticks as preventing or treating disease—in this case, hypercholesterolemia—under federal law the products should be considered unapproved new drugs. While there is an FDA-approved health claim for some foods that do have plant sterol esters, Smart Balance's Blended Butter Sticks do not contain enough of those sterols or certain beneficial nutrients, and have too much unhealthful saturated fat, to qualify.

Finally, CSPI is instructing Abbott Laboratories that it will face a lawsuit if it continues to make deceptive and illegal claims in connection with its Ensure Complete Nutrition Shake and Ensure Muscle Health Shake. Originally developed as a sole-source nutrition or meal-replacement product to be used under medical supervision, Abbott markets these shakes to the general public as a twice daily "habit that could help you feel better," and as "part of a healthy diet." Made mostly of water, sugar, and corn maltodextrin, Ensure Complete has 350 calories and Ensure Muscle has 250 calories. While the products might be appropriate in the context of a seriously ill patient unable to maintain a healthy weight, the "2 bottles per day" that the company suggests people consume would provide more sugar than the American Heart Association recommends in an entire day.

"The last thing most Americans need is to shoehorn an additional 500 to 700 liquid calories into their diets," Gardner said. "These shakes are more likely to promote obesity, diabetes, and other health problems, than they are to promote healthy muscles, hearts, bones, and so on."

Abbott also misleads consumers about the omega-3 content, even going so far as to produce a video comparing a bottle of Ensure to a salmon steak. While salmon does have the heart-healthy omega-3s DHA and EPA, Ensure has the plant-derived ALA, whose benefit is less clear. Ensure's claims to support heart health and immune function, or its claim that it can "rebuild muscle strength" or "protect, preserve and promote muscle health," are all impermissible or illegal claims, according to CSPI's notification.

"In a perfect world, agencies such as the Food and Drug Administration and the Federal Trade Commission would be aggressively policing the marketplace and taking enforcement action against companies like these," said CSPI executive director Michael F. Jacobson. "Until then, lawsuits by consumer groups and private citizens can play an important role by using the courts to get companies to change their labeling and advertising for the better."

CSPI's litigation department has won agreements with major companies, including a 2007 agreement with Kellogg setting nutrition standards for the foods it markets to kids, a 2008 agreement with Airborne providing refunds to consumers who bought the deceptively labeled product, and a 2012 agreement with Pfizer improving the labeling of its Centrum multivitamins. CSPI lawsuits also prompted KFC and Burger King to accelerate the pace with which they removed artificial trans fat from their fried foods, spurred General Mills to improve labeling for Strawberry Fruit Roll-Ups, as well as many other improvements to products' labeling, marketing, and formulation.