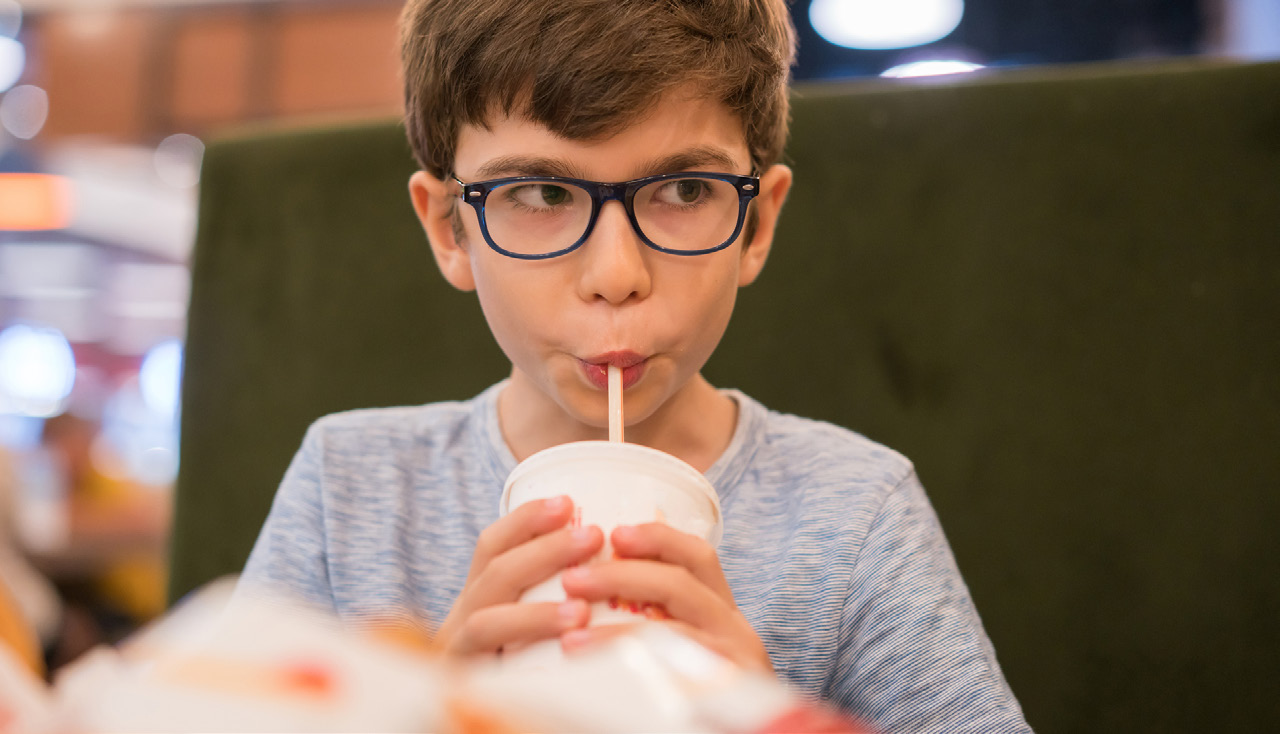 WASHINGTON—Soda, lemonade, and other sugary drinks are less common than they used to be on kids’ menus at chain restaurants according to new research issued today by the nonprofit Center for Science in the Public Interest. Of the top 50 restaurant chains, 39 have children’s menus, and of those, 61 percent push sugary beverages for kids, down from 93 percent in 2008 when CSPI first conducted similar research and began a campaign to encourage restaurants to offer healthier children’s meals. CSPI says that while the progress is welcome, much more needs to be done. When the nonprofit watchdog group expanded its analysis to the top 200 chains, 83 percent of the 135 chains with children’s menus offered soda or another sugary drink.

“Feeding children well is tough enough without restaurants pushing soda as a default for little kids,” said CSPI vice president for nutrition Margo G. Wootan. “Given the strong evidence that soda and other sugary drinks promote weight gain, diabetes, heart disease, and tooth decay, it’s time that all restaurants and soda companies take them off the kids’ menu.”

One of the reasons the bigger chains show more progress than smaller chains is that advocates have pushed hardest for changes at the top. In 2013, McDonald’s announced it would promote only water, milk, and juice with its Happy Meals. Wendy's removed sugary drinks from kids' menus in 2014; Burger King, and Dairy Queen removed them in 2015; and Jack in the Box followed suit in 2016. A handful of major chains, including Subway and Panera Bread, never offered sugary drinks on kids’ menus in the first place.

Because the biggest chains have the most outlets, a proportionately larger number of outlets no longer offer soda or sugary drinks on kids’ menus. Of the 142,747 outlets among the top 200 chains, 58 percent do not.

Contributing to soda’s gradual disappearance from restaurant kids’ menus is the growing number of states and localities that have enacted healthy kids’ meal policies. In 2018, California became the first to enact such a policy statewide, when it passed legislation requiring chains to make healthier beverages like water or milk the default drink offered with kids’ meals. Hawaii and Delaware recently followed suit. New York City, Baltimore, Louisville, and Lafayette, CO have enacted similar measures.

Industry seems to be taking the hint. The National Restaurant Association’s Kids LiveWell program encourages member companies to make formal commitments to improve the nutritional quality of kids’ meals. And even the American Beverage Association and its member soda companies supported the New York City legislation and adopted voluntary guidelines for healthier default beverages for children and have committed to work with their restaurant customers to adopt them. On its own, Taco Bell eliminated its largest soda serving size without customer pushback.

Where not prohibited by state or local policies, Starbuck’s, Chick-fil-A, Sonic, Chili’s, Cracker Barrel, Panda Express, and Denny’s are among the biggest chains that push soda on children’s menus. Popeye’s Louisiana Kitchen is the biggest restaurant chain offering only sugary beverages—and no healthier options—on its kids’ menus.

“The good news is that some big restaurant chains are listening to parents,” Wootan said. “But others like Denny’s, Chick-fil-A, and Popeye’s are still pushing disease-promoting sugary drinks to children. Those laggards should learn from other restaurants that have dropped kid-targeted sodas and get out in front of the growing movement of state and local kids’ meal policies.”

The Center for Science in the Public Interest is America’s Food and Health Watchdog.