WASHINGTON—The Coca-Cola Company has been served notice of a class action lawsuit filed over what the Center for Science in the Public Interest (CSPI) says are deceptive and unsubstantiated claims on its VitaminWater line of beverages. Coke markets VitaminWater as a healthful alternative to soda by labeling its several flavors with such health buzz words as "defense," "rescue," "energy," and "endurance." The company makes a wide range of dramatic claims, including that its drinks variously reduce the risk of chronic disease, reduce the risk of eye disease, promote healthy joints, and support optimal immune function.

In fact, according to CSPI nutritionists, the 33 grams of sugar in each bottle of VitaminWater do more to promote obesity, diabetes, and other health problems than the vitamins in the drinks do to perform the advertised benefits listed on the bottles.

CSPI's litigation department is serving as co-counsel in the suit, filed yesterday in United States District Court in the Northern District of California. The other law firms involved in the case are Reese Richman LLP and Whatley Drake & Kallas, LLC. 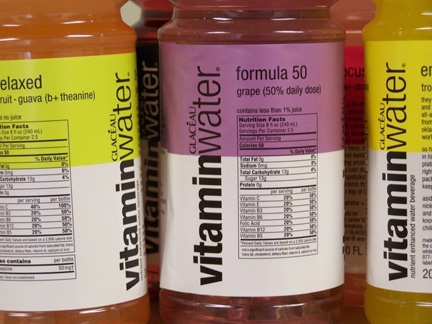 VitaminWater contains between zero and one percent juice despite product names such as “endurance peach mango” and “focus kiwi strawberry.”

"When I bought VitaminWater, frankly I thought I was doing myself a favor health-wise," said the plaintiff, San Francisco, California, resident James Koh, who used to purchase and drink VitaminWater after working out at the gym. "I was attracted by the prospect of getting extra vitamins. But I had no idea that I was actually getting almost a Coke’s worth of sugar and calories. There’s no way I would have spent money on that, had I known."

VitaminWater's website, marketing copy, and labels claim that VitaminWater is healthy, claiming, for example, that "balance cran-grapefruit" has "bioactive components" that promote "healthy, pain-free functioning of joints, structural integrity of joints and bones" and that the nutrients in “power-c dragonfruit" "enable the body to exert physical power by contributing to the structural integrity of the musculoskeletal system."

While it is true that vitamins do play various roles in the human body, the statements on VitaminWater labels go far beyond even the loose, so-called "structure/function claims" allowed by the Food and Drug Administration and cross the line into outright fraud, according to CSPI.

According to documents filed in 2007 with the Securities and Exchange Commission, Coke acknowledged that "obesity and other health concerns may reduce demand for some of [its] products," and that "increasing public awareness" about health experts’ concerns over sugar-sweetened beverage could affect the company's profitability. That year, Coke acquired VitaminWater's parent company, Glaceau. Also in 2007, CSPI sued Coke and its partner Nestlé over an artificially sweetened green-tea-based drink called Enviga. The companies claim Enviga burns more calories than it consumes, resulting in weight loss—a claim that CSPI says is not supported by the small number of studies on the drink's ingredients.

"Coke fears, probably correctly, that they’ll sell less soda as Americans become increasingly concerned with obesity, diabetes, and other conditions linked to diets too high in sugar," said CSPI litigation director Steve Gardner. "VitaminWater is Coke's attempt to dress up soda in a physician's white coat. Underneath, it’s still sugar water, albeit sugar water that costs about ten bucks a gallon." VitaminWater typically retails for about $1.49 for a 20-ounce bottle.

"My advice to consumers is to get your vitamins from real food," said CSPI executive director Michael F. Jacobson. "If you have reason to believe you have a shortcoming of one vitamin or another, perhaps take an inexpensive supplement. But don't seek out your vitamins in sugary soft drinks like Coke’s VitaminWater."

Since 2005, CSPI's litigation project has, on its own or in cooperation with private law firms, negotiated settlements or voluntary changes to marketing practices with Anheuser-Busch, Airborne, Kellogg, Frito-Lay, Quaker Oats, Pinnacle Foods and others. Whatley, Drake & Kallas, LLC is a 35-lawyer firm with offices in Birmingham, New York City, and Boston which concentrates on complex class action and derivative litigation, including consumer, healthcare, insurance, employee benefits, antitrust, securities, and mass tort litigation. Reese Richman LLP handles commercial litigation with a focus on consumer, antitrust, and securities class actions.