More than 80,000 Americans have filed comments with the U.S. Department of Agriculture to oppose its proposals to weaken school nutrition standards, including a proposed three-year delay of the next phase of sodium reduction in school meals and a possible elimination of any further decreases.  We stand with them in urging the Trump administration to continue the progress to improve school food and support children’s health.  This opposition is joined by over 50 health and child welfare organizations and more than 50 scientists and academics. Sixty percent of Americans oppose rolling back school nutrition, according to a new poll released by CSPI.

Prior to the Trump proposal, the plan was for schools to gradually decrease the amount of salt in school meals to safer levels over ten years.  That plan is well underway.  A three-year delay would mean that school kids would eat 84 more teaspoons of salt—or more than three months’ worth of extra sodium—from school meals.  Nine out of ten kids today eat too much salt, and high salt intake is linked to high blood pressure, even in kids, which can lead to heart disease and stroke later in life.

CSPI, other health organizations, and the public also oppose maintaining a waiver for schools to provide fewer whole grains.  Eighty-five percent of schools have shown that they can meet the requirements for whole grains in schools.  All school children should have access to the health benefits of more whole grains and less white flour and refined grains.

Thanks to the existing school nutrition standards, schools are already providing low-income children (through the National School Lunch and Breakfast Programs) with healthier school meals with less salt, more whole grains, fruits, and vegetables, and no trans fat, in addition to removing most soda and junk food from schools. 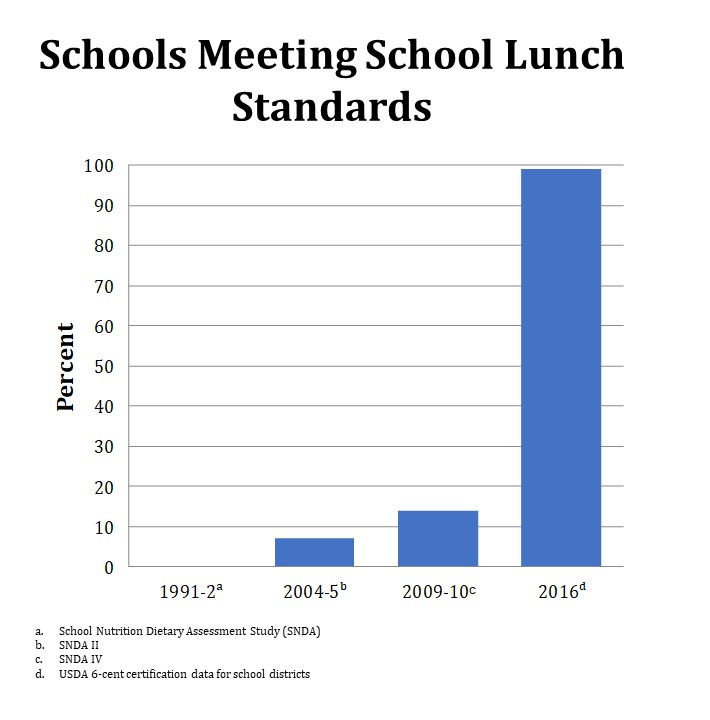 The improvements to school food are an amazing success story and one of the most important policy achievements in a generation.  The Harvard T.H. Chan School of Public Health estimates that the improvement to school food could prevent more than 2 million cases of childhood obesity and save up to $792 million in health-care related costs over ten years.  With such tremendous progress, it makes no sense for the Trump administration to allow schools and companies to reverse course and to jeopardize kids’ health.