The World Public Health Nutrition Association, World Obesity Federation, Consumers International, and health groups from around the globe are calling on Coca-Cola and PepsiCo to adopt and enforce a policy of not marketing sugar drinks to children aged 16 and under.

Organized by the nonprofit Center for Science in the Public Interest in Washington, DC, the groups wrote to Coca-Cola CEO Muhtar Kent and PepsiCo CEO Indra Nooyi. The letter was also sent to the companies’ major institutional investors for their consideration at Coca-Cola’s annual meeting on April 27 and PepsiCo’s meeting on May 4. Lower-income countries, in particular, will face steep and sometimes-unaffordable increases in the health-care costs associated with rising rates of type 2 diabetes, obesity, heart disease, and other soda-related health problems, the groups say.

“While sugar-drink consumption in the United States and Europe has been declining, your company and others are investing billions of dollars annually to increase sales in low/middle-income countries in Asia, Africa, the Middle East, and Latin America,” according to the letter. “Much of the marketing is directed at or appeals to children and adolescents. Euromonitor predicts steady increases in consumption. And as sure as night follows day, those increases in consumption will lead to increases in chronic diseases and health-care costs.”

In February, CSPI released Carbonating the World, a report exposing the billions of dollars Coke and Pepsi are spending in such countries as Brazil, China, India, and Mexico to promote sugar-drink sales. CSPI said that the soda companies are following in the footsteps of tobacco companies, which, as cigarette sales in the United States plummeted, increased their marketing in the developing world. Gary Fayard, Coke’s chief financial officer, called the world’s 3.5 billion people in their teens and twenties the company’s “core demographic.” Coca-Cola has emerged as Africa’s top employer, according to the report. 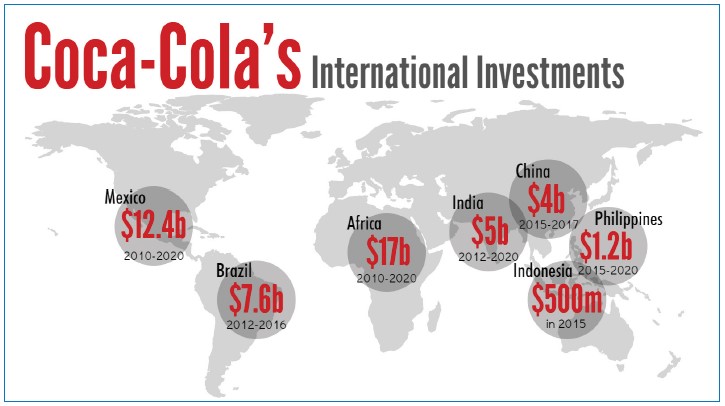 The groups writing to Coke and Pepsi today are also urging the companies to reduce container sizes, include warning notices about adverse health effects on soda containers, reduce the calorie content of beverages to no more than 40 calories per 12 ounces, and stop fighting public health measures aimed at reducing soda consumption, such as taxes, warning labels, or marketing restrictions.

“Coke, Pepsi, and other soda marketers are fond of lecturing their customers about personal responsibility and balancing calories in with energy out,” said CSPI president Michael F. Jacobson. “But it’s time for soda marketers to begin exercising their corporate responsibility, and honestly acknowledging their main product’s contribution to obesity and chronic disease would be an important first step.”

“We have seen first-hand in Mexico how the soda industry uses its power to block public policy measures and continue practices, such as child-targeted marketing, that exploit children,” said Alejandro Cavillo, executive director of the Mexican consumer organization El Poder del Consumidor. “That clearly poses risks to their health today and in the future.”