That’s the finding of a new report, released today by the nonprofit Center for Science in the Public Interest, that takes a withering look at the agency’s inaction on dyes in the face of what CSPI says is a growing consensus among researchers and healthcare providers who treat behavioral problems that avoiding food dyes benefits some children.

Since 2011, eight detailed analyses, including two meta-analyses, concluded that excluding food dyes, or a diet that eliminates dyed foods and certain other foods and ingredients, reduces behavior problems in some children. Furthermore, recent analyses of the dye content of popular foods and drinks indicate that many American children are consuming amounts of dyes far higher than the levels demonstrated in some trials to trigger problems. CSPI, which in 2008 asked the FDA to ban Red 40, Yellow 5, and six other synthetic colorings, says that the dyes fail to meet the federal safety standard for color additives, which requires “convincing evidence that establishes with reasonable certainty that no harm will result from the intended use of the color additive.”

Most food and drink companies, including ones that sell products in the United States, have eliminated most dyes in products sold in Europe, where regulators have required labels warning consumers about the behavioral problems associated with dyed foods. But in the United States, a forthcoming study conducted by a researcher at the University of North Carolina, Chapel Hill, and CSPI found that more than 90 percent of child-oriented candies, fruit-flavored snacks, and drink mixes are colored with dyes and that a majority of child-oriented foods made by such companies as Kraft, PepsiCo, and General Mills contain dyes. 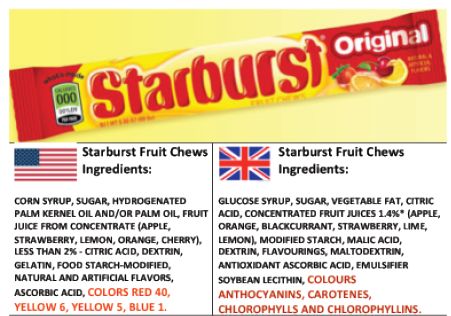 “Major food companies like Coca-Cola, General Mills, McDonald’s, and PepsiCo should be embarrassed that they’re selling their American customers foods colored with Yellow 5, Yellow 6, Red 40, and other synthetic dyes, even as they’re selling naturally colored or dye-free versions of the same foods in Europe,” said CSPI president Michael F. Jacobson. “American children will continue to be exposed to these powerful chemicals so long as FDA lags behind its European counterparts.”

Two important meta-analyses have been published since 2011, the year the FDA’s Food Advisory Committee examined the science surrounding food dyes and children’s behavior and narrowly declined to recommend warning labels on dyed foods. The first, which received funding from the food industry, found that adopting a diet free of food dyes and some other foods and ingredients reduced symptoms of attention deficit hyperactivity disorder in approximately a third of children with that condition. This meta-analysis, published in the Journal of the American Academy of Child Adolescent Psychiatry, found that synthetic colorings were associated with a slight statistically significant increase in ADHD symptoms as assessed by parents or by attention tests. It estimated that as many as eight percent of the millions of children with ADHD may suffer symptoms caused by synthetic food colorings.

A second meta-analysis published in the American Journal of Psychiatry found that avoiding dyed foods was one of two effective non-drug treatments for ADHD in some children.

CSPI’s report also identifies six other new reviews that point to the risks posed by dyes, including a 2012 review published in Neurotherapeutics stating that “until safety can be better determined, we suggest minimizing children’s exposure” to food dyes.

Courtney Sucato, a mom from Phoenix, AZ, figured out that her son Tyler reacted to Yellow 6 by noticing that he had “total meltdowns” whenever he ate crackers or candy or drank soda that contained the dye. Since his parents removed dyes from his diet, Tyler is like “a new kid,” and “our home life is so much better.”

“When our daughter consumed artificial dyes, she had uncontrollable fits of rage,” wrote Becky Hall of Atlanta, GA. “She yelled, tossed things on the ground, and threw things…Since we removed artificial dyes form her diet, she no longer has these fits.”

CSPI’s report also accuses the FDA of providing incorrect information on brochures and on its website that misleads consumers by denying the science connecting dyes to problems. A blog post by the chief medical officer of the FDA’s foods division says the studies linking dyes and ADHD have been “inconclusive, inconsistent, or difficult to interpret.” Another web page and brochure promises that the dyes are not just safe, but “very safe.”

“It’s bad enough that the FDA has declined to ban dyes or require warning labels on dyed foods in light of the strong scientific evidence that they cause behavioral problems,” said CSPI senior scientist Lisa Lefferts. “It adds insult to injury that the FDA hasn't even informed consumers about the impact these unnecessary chemicals are having on some children and their families.”

Just a single serving of some foods designed to be popular with kids has more dye than some of the amounts used in clinical trials that triggered reactions in some kids. A cup of Kool-Aid Burst Cherry contains 50 milligrams of various dyes, almost twice as much as the dose that caused behavior reactions in some studies. A two-tablespoon serving of Pillsbury Confetti Funfetti chocolate frosting contains 41 mg of dyes. It’s also easy to see how eating a number of servings of foods with less dye can add up to significant amounts, says CSPI.

CSPI’s report recommends that the FDA ban synthetic dyes, require a warning label in the interim, and update the inaccurate information on its website. At a bare minimum, says CSPI, the FDA could publicize its own determination that “for certain susceptible children with ADHD and other problem behaviors, the data suggest that their condition may be exacerbated by exposure to a number of substances in food, including, but not limited to, synthetic food colors.”

Today CSPI also submitted its report, Seeing Red: Time for Action on Food Dyes, to the FDA’s regulatory docket on food dyes. “FDA cannot, consistent with its legal requirements, acknowledge the evidence regarding the harmfulness of dyes and yet continue to do nothing,” wrote CSPI to Acting FDA Commissioner Stephen Ostroff. “Indeed, continued inaction is the only course that remains utterly unjustified by ethics, science, or law.” Separately, 13 scientists with expertise in toxicology or behavioral problems in children joined CSPI’s Jacobson and CSPI senior scientist Lisa Y. Lefferts in a letter to Ostroff urging timely federal action on dyes.