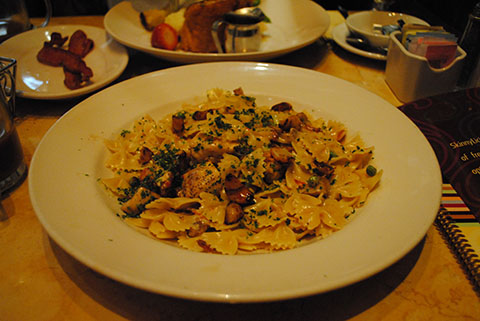 Three of nine Xtreme Eating Awards for 2014 were “won” by The Cheesecake Factory, though the nonprofit Center for Science in the Public Interest says the 150-outlet mall fixture could have easily swept the entire list. The chain’s Bruléed French Toast, a plate of custard-soaked bread, topped with powdered sugar and served with maple-butter syrup and bacon, would require one to swim laps for seven hours to burn off its 2,780 calories. The meal also has almost five days’ worth of saturated fat (93 grams), 2,230 milligrams of sodium (more than a day’s worth), and 24 teaspoons of (mostly) added sugar. To put that load of sugar into context, the American Heart Association recommends a daily limit of nine teaspoons of added sugar for men and six for women.

The Cheesecake Factory may have reformulated a few dishes in response to being named a “winner” of Xtreme Eating Awards in years past. “I was sick of winning that prize,” Cheesecake Factory founder and chief executive officer David M. Overton told the Wall Street Journal. Nevertheless, the chain still sports numerous highly qualified Xtreme contenders, including a 2,800-calorie brunch item, a 2,400-calorie pasta, and a 1,500-calorie slice of cheesecake.

“Mr. Overton may be tiring of the prize, but he’s certainly making sure that The Cheesecake Factory remains the most calorically extreme chain that we’ve seen,” said CSPI dietitian Paige Einstein.

Other winners of the 2014 Xtreme Eating Awards include:

“When French toast is ‘Bruléed,’ fries are ‘bottomless,’ and steaks are now garnished with not just one, but two Italian sausages, it’s clear that caloric extremism still rules the roost at many of America’s chain restaurants,” Einstein said. “Two out of three American adults are overweight or obese and one in 10 adults has diabetes, thanks in part to The Cheesecake Factory, Chevys Fresh Mex, Maggiano’s Little Italy, and much of the rest of America’s chain restaurant industry.”

Some help may soon be on the way for people who want to avoid 2,500-calorie entrées and 1,500-calorie desserts at chain restaurants. The health care reform legislation signed in 2010 contained a requirement that chains with 20 or more outlets disclose calorie counts on menus. The menu labeling regulations are being finalized by the Food and Drug Administration and the White House. When the rules go into effect, diners will easily see, for instance, that a slice of The Cheesecake Factory’s Reese’s Peanut Butter Chocolate Cake Cheesecake has 1,500 calories. (Unfortunately, the rules would not require the chain to disclose the fact that it would take four-and-a-half hours of aerobics to burn off that slice).

Nutrition Action Healthletter is published 10 times a year. Print and electronic subscriptions are available at NutritionAction.com.