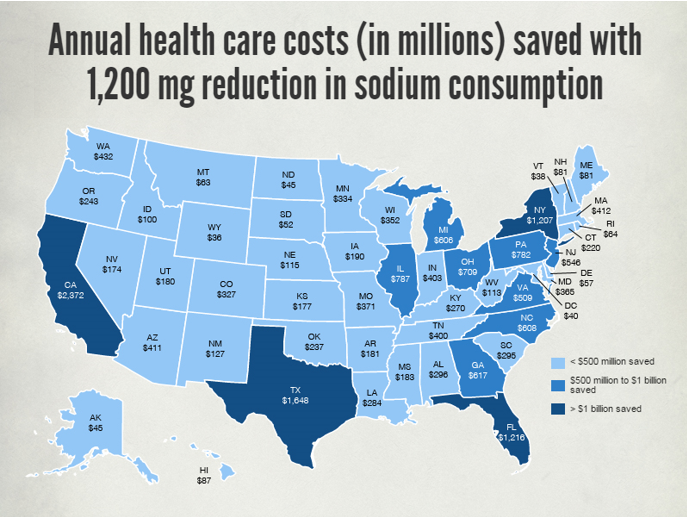 A new analysis of potential health care cost savings to be achieved by reducing sodium in the U.S. diet shows annual savings ranging from $36 million for Wyoming to $2.4 billion for California.

Americans currently consume about 3,500 milligrams per day of sodium—or about a teaspoon and a half of salt a day. The 2015 Dietary Guidelines Advisory Committee, echoing the recommendations of the 2010 Dietary Guidelines for Americans, calls for a reduction to 2,300 mg/day—about one teaspoon of salt. Excess sodium consumption boosts blood pressure, which is a leading cause of cardiovascular disease, accounting for two-thirds of all strokes and half of all cases of heart disease.

The national health care costs for treating these illnesses are enormous, and previous research has estimated national medical savings ranging from $10 billion to $24 billion with a 1,200 mg/day reduction in sodium intake. Adjusting for inflation and population growth, the Center for Science in the Public Interest calculated state-by-state costs achievable with the recommended sodium reduction, and found that four states stand to save more than $1 billion a year:

Eight other states would potentially save between $500 million and $1 billion a year in reduced health care costs:

CSPI calculations are rough estimates, because sodium intake presumably varies from state to state, and the vulnerability of a state’s population to develop hypertension varies depending on the state’s ethnic, gender, health and age distributions. The report’s estimates do not consider those population variables.

“The avoidable health care costs imposed by high-sodium diets in every single state are taking money away from other critical priorities,” said Michael F. Jacobson, CSPI executive director. “It is long past time for this nation to act on effective public health prevention measures that would save lives and, yes, save money too.”

In 2005, CSPI formally petitioned the Food and Drug Administration to set limits on sodium levels, and a 2010 Institute of Medicine Report again called on the FDA to reduce sodium in the food supply in a gradual manner. However, the FDA has yet to release mandatory or even voluntary guidelines after more than four years of inaction.

FDA action would also support the public health investments being made by the Centers for Disease Control and Prevention in state-level sodium-reduction efforts, according to CSPI. CDC has provided funding to the Association of State and Territorial Health Officials to provide technical assistance for sodium reduction initiatives to a number of states, including Maine, New York, Oregon, Washington, Arkansas, California, Delaware, Indiana, Massachusetts, Montana, and North Carolina, Connecticut, Iowa and Missouri.

“Vermont is committed to reduce sodium consumption throughout the state, for everyone from children in school to seniors in subsidized housing,” said Vermont Department of Health Commissioner Harry Chen, MD. “Through CDC funding we are providing resources to gradually change Vermonters’ taste preferences so they can enjoy delicious, lower-sodium foods. We encourage the FDA to do their part in facilitating a gradual reduction of sodium in processed foods.”

The National Association of Chronic Disease Directors has been heavily involved in another CDC-supported effort: the Million Hearts Initiative, aimed at preventing one million heart attacks and strokes in the U.S. by 2017.

“NACDD was one of the very first national partners to sign onto Million Hearts and has since remained at the forefront in conducting Million Hearts workshops and promoting the effort,” said John W. Robitscher, MPH, NACDD chief executive officer. “Sodium reduction is a perfect target for public health and we are proud to have a long history of supporting efforts across every state and U.S. territory.”