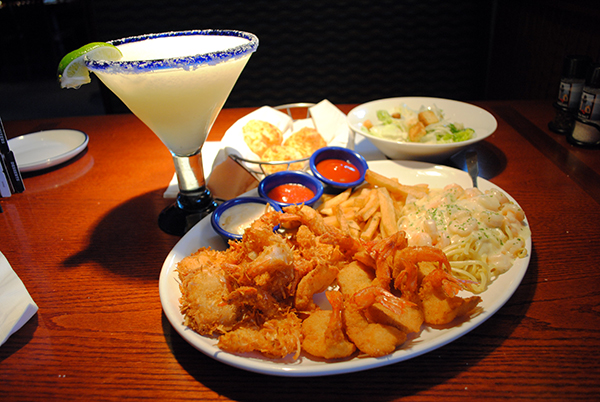 Imagine chowing down on an eight-piece bucket of KFC Original Recipe fried chicken, four sides of mashed potatoes with gravy, four pieces of corn on the cob, and eight packets of buttery spread—all by yourself.

It takes a lot to shock the nutritionists at the Center for Science in the Public Interest who compile the annual Xtreme Eating Awards. But this year they found a single restaurant meal that’s the nutritional equivalent of that KFC binge. Red Lobster’s “Create Your Own Combination” delivers 2,710 calories, and four days’ worth of sodium (6,530 milligrams), if you choose the Parrot Isle Jumbo Coconut Shrimp, Walt’s Favorite Shrimp, and Shrimp Linguine Alfredo to go with the Caesar salad, French fries, and one Cheddar Bay Biscuit. But wait, there’s more!

Wash down that combo with the Lobsterita—the chain’s trademarked 890-calorie, 24-ounce margarita—and the meal reaches 3,600 calories, enough calories for today and most of tomorrow. It’s the highest-calorie meal among the 2015 Xtreme Eating “dishonorees,” as CSPI calls them.

“This nutritional shipwreck from Red Lobster exemplifies the kind of gargantuan restaurant meal that promotes obesity, diabetes, and other diet-related diseases,” said CSPI registered dietitian Paige Einstein. “If this meal were unusual, that would be one thing, but America’s chain restaurants are serving up 2,000-calorie breakfasts, 2,000-calorie lunches, 2,000-calorie dinners, and 2,000-calorie desserts left and right. Abnormal is the new normal.”

The full list of “winners” was published today in the June issue of CSPI’s flagship publication,Nutrition Action Healthletter. Some of them include:

Rules finalized by the Food and Drug Administration requiring calories to be listed on chain-restaurant menus are scheduled to take effect in December. Until then, CSPI suggests avoiding extreme entrées by ordering from “light” menus, where available, such as the Simple & Fit menu at IHOP or the SkinnyLicious menu at The Cheesecake Factory. With about 600 calories, those meals aren’t exactly Lean Cuisine, but they are far better than what you’d find on the rest of the menu. To cut calories, CSPI recommends ordering a thin crust pizza over hand-tossed or pan; a small filet or sirloin over a New York Strip, ribeye, or sirloin; broiled, steamed, baked, or grilled seafood over fried seafood.

Nutrition Action Healthletter is published 10 times a year. Print and digital subscriptions, as well as a free daily tips email, are available at NutritionAction.com.